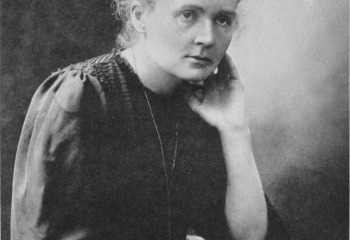 A Woman of Many Firsts, Marie Curie Embraced the Unknown

By any measure, Marie Curie was one of the most revolutionary scientists in history. In 1903, she became the first woman to win a Nobel Prize. She was also the first person to be honored with two Nobel Prizes, and she remains both the only woman to win twice and the only person to win in multiple sciences.

At IV, we are focused on the road ahead – how to make the future better than the present through new inventions. But as we generate ideas to propel our world forward, it is important to remember those brave pioneers who paved the road that we continue to travel on. Just ahead of what would be her 149th birthday, we honor one of these early trailblazers whose work led to the development of cancer treatments, advanced x-rays and the redefining of established ideas in physics and chemistry.

Widely considered the most important piece of research she conducted, Curie was able to show that the radiation was not the outcome of the interaction of molecules, but came from the atom itself. She used the electrometer, a device for measuring electrical charge, to determine that the activity of uranium compounds only depends on the quantity of the uranium.

In partnership with her husband, Pierre, Curie discovered two elements, polonium and radium. After almost a decade of research, Curie developed methods for the separation of radium from radioactive residues in order to characterize and study its properties, particularly therapeutic properties.

During World War I, Curie recognized the need for field radiological centers near the front and developed mobile x-ray and radiography units. She helped to equip ambulances with x-ray equipment, which she herself drove to the front lines. It is estimated that over one million wounded soldiers were treated between the mobile units and the 200 radiological units at field hospitals.

Curie devoted her life to advancing science, dying in 1934 from her long-term exposure to radiation. After her death, Curie became the first woman to be honored with interment in the Pantheon on her own merits. At IV, we look at where we are today in the world of science with overwhelming admiration for Marie Curie and her enduring legacy.