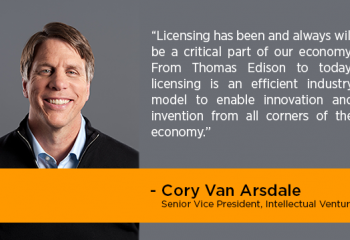 Cory Van Arsdale on licensing, collaboration and the future of patenting

At Intellectual Ventures, part of our business involves providing customers and partners worldwide with patents and invention-related services. As a result, Senior Vice President of Global Licensing Cory Van Arsdale has great perspective on the state of the global intellectual property ecosystem.

Cory recently sat down with IPPro Patents to weigh in on the state of technology and patent licensing; check out a few of his thoughts below. For the full interview, be sure to read Issue 11 of IPPro Patents.

How are tech companies branching into new technologies?

Tech companies, at least the ones that embrace the future and where it’s headed, are continually embracing new technologies to the extent it brings them new markets and/or takes them where their existing market is headed. This is true for what would be traditionally not considered a tech company as well.

As an example, several tech companies are investing heavily into driverless cars. They are doing this not by investing in traditional car IP, but rather by leveraging what is their core expertise in tech and where cars seem to be headed.

Non-tech companies are also investing heavily in technology, particularly when technology has the ability to disintermediate their value stream. An example there is banking. Five years ago, it was somewhat rare to use your mobile phone to do any banking other than perhaps looking up your account balance. Now, I, like several individuals, have not even been in a bank branch in the last few years, as I use my mobile to make check deposits, transfer funds to anyone, anywhere, and generally operate my banking life.

How big and important is the licensing business?

Overall, licensing has been and always will be a critical part of our economy. From Thomas Edison to today, licensing is an efficient industry model to enable innovation and invention from all corners of the economy.

As for licensing in the current and near future environment, it is highly dependent upon both the timeframe and the applicable industry.

With respect to particular industries, it will depend in large part upon the relevant players in that industry. I do believe that licensing will be an integral part of any industry, either directly or indirectly.

In areas where companies are not the leaders, how can they put their patents to work?

A licensing program is certainly an option here, although most companies are unwilling to devote the time, resources and headcount to licensing activities. [So] Intellectual Ventures works with many companies to acquire patents from them and thereby monetize their portfolio efforts.

This allows companies to make educated bets in certain spaces core to them, and if those bets do not pan out or, more likely, if they have material and significant strength in an area that does work out, they can monetize their portfolio with Intellectual Ventures and hedge their R&D and attendant patenting efforts, which delivers value for their shareholders.

Check out the full version of Cory’s interview at IPPro Patents.