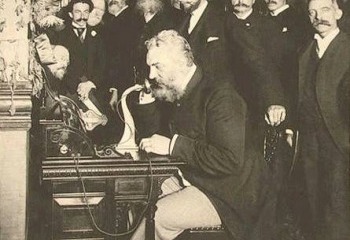 “When one door closes, another opens; but we often look so long and so regretfully upon the closed door that we do not see the one which has opened for us.”

Bell at the opening of the long-distance line from New York to Chicago in 1892 via Wikimedia Commons.

March marks the quick succession of two important anniversaries in the life of Alexander Graham Bell – his birthday (March 3) and the date he patented his groundbreaking telephone (March 7). And though we think of his invention as one that changed the course of history, success for Bell wasn’t always smooth. But while Bell encountered failure in his long career, it did not stop him from exploring new ideas.

Known as the father of the telephone, Alexander Graham Bell’s invention historically changed how people communicated. In fact, Bell’s innovation completely disrupted the norm of communications. When he tried to sell the telephone patent to Western Union in the late-1800s, the company’s president scoffed at the idea, and thought of the telephone as only a toy. Furthermore, Bell’s other 16, non-communications-related patents are a testament to his general interest in inventive ideas across various activities.

Despite the multitude of invention success, Bell encountered failure as well. Many of his inventions, while ahead of their time, were not as successful as the telephone. Here are a couple of Bell’s invention ideas that did not work out as intended:

This near-success occurred in 1881 after the assassination of then-President James A. Garfield. Bell, his assistant, Sumner Tainter, and mathematician Simon Newcomb developed a device that hummed when close to metal. During initial testing, the device succeeded and found bullets that the men placed under their clothing. However, while searching for the bullet in President Garfield’s body, the detector hummed continually.

Unfortunately, the bedsprings in President Garfield’s bed led to the continuous humming, and the invention was seemingly a complete failure. Nonetheless, Bell is credited with providing the framework for the modern metal detector.

Later in life, Bell immersed himself in the study of flight. He supported aerospace engineering through the Aerial Experiment Association (AEA), and came up with concepts meant to progress the science of human flight. From 1907 through 1912 Bell primarily experimented with tetrahedral wings, or box-kites. However, many of his concepts could not stay aloft for long periods of time, and the Wright brothers became the first inventors to perfect extended flight.

Nevertheless, architect and artist, Tomás Saraceno, recently used Bell’s idea to create a tetrahedral wing that stays aloft in the air. This concept, according to Saraceno may one day lead to the development of floating solar-powered structures for energy production.

Interested to hear how more inventors throughout history persevered in the face of failure? Check out previous installments of our Failing for Success series, including Henry Ford, Nikola Tesla and The Wright Brothers.