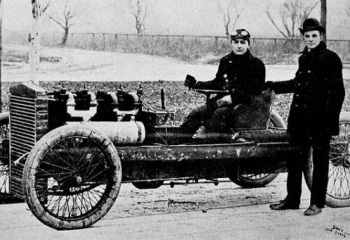 Failing for Success: Henry A. Ford

“Failure is simply the opportunity to begin again, this time more intelligently.” – Henry A. Ford

Henry Ford, standing, and Barney Oldfield in 1902, via Wikimedia Commons.

Henry Ford is one of the most renowned entrepreneurs in history. He optimized transportation and forever changed the United States automobile industry. His innovative manufacturing process produced low-cost, reliable vehicles, while simultaneously keeping his workers well-paid and loyal.

Before his success, however, Ford encountered failure during initial production of his first automobile. His investors got cold feet over Ford’s meticulousness, and he was unable to find solid financial backing for the automobile in his first two ventures. Nonetheless, Ford used the lessons from these failures to instruct his future success as an inventor and a businessman.

Once Ford created the Quadricycle, an automobile prototype, he needed funding to start work on enhancing it. Capital was difficult to attain, however, and in the late 1800s no one had established a standard business model for the automobile industry. Ford convinced William H. Murphy, a Detroit businessman, to back his automobile production. The Detroit Automobile Company resulted from this union, but problems arose shortly after its creation. In 1901, a year and a half after the company began operations, Murphy and the shareholders got restless. Ford wanted to create the perfect automobile design, but the board saw little results. Soon after, they dissolved the company.

Ford recalibrated his efforts after his first failure. He realized that his previous automobile design depended on serving numerous consumer needs. He convinced Murphy to give him a second chance, a rare occurrence in the early 20th century. However, their second venture, the Henry Ford Company, stumbled from the start. Ford felt that Murphy pressured him to prepare the automobile for production and set unrealistic expectations from the beginning. Shortly after Murphy brought in an outside manager to supervise Ford’s process, Ford left the company and everyone wrote him off.

These two failures could have been career-ending, but Ford continued. Several years after the second parting with Murphy, Ford met Alexander Malcomson, a coal magnate with a risk-taking spirit like Ford. Malcomson gave Ford full control over his production, and the company introduced the Model A in 1904.

For Henry Ford, failure did not hinder innovation, but served as the impetus to hone his vision for a technology that would ultimately transform the world.