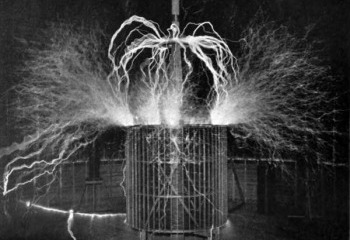 “Our virtues and our failings are inseparable, like force and matter. When they separate, man is no more.” – Nikola Tesla

Nikola Tesla: An inventive force of nature so great that 73 years after his death, he remains a household name and source of inspiration around the world. His technological developments have had incredible longevity; his alternating current (AC) is still the standard for global power transmission. Other inventions formed the basis of current technology, like the Tesla coil, which was used early on for some of the first radios. (The technology remains so cool and inspirational, IV Lab has one in its lobby.)

Tesla embraced the archetype of many inventors, brilliantly pursuing the expansion of knowledge. With such a zeal for progress comes at the price of inevitable failure. However, this failure did not lead him to discontinue his endeavors. In fact, Tesla used failure to guide subsequent experiments, eventually leading to a variety of successes.

Tesla moved to Colorado in 1899. There he theorized that the Earth was excellent conductor of electricity. To test this hypothesis, Tesla build a lab on his prairie land close to Colorado Springs. The lab’s structures included a 142-foot metal mast supporting a large copper ball. Although Tesla’s notes are not conclusive and despite this incredible investment in infrastructure, it is unlikely that Tesla’s Colorado Spring experiments succeeded to transmit a current. While he didn’t have the definitive success he may have wanted, Tesla used these experiments to learn and advance his program. Tesla would go back to New York to continue his experiments in search of further understanding currents and electricity – later making incredible breakthroughs.

In 1901, after his Colorado experiments, Tesla purchased 200 acres of property from a potato farmer in Wardenclyffe, NY and started construction on a laboratory. The primary structure of this lab was a 187-foot transmitter tower, called the Wardenclyffe Tower, which was meant to be the first broadcasting system in the world. The structure was largely based on his previous experience in Colorado. Failure befell him, however, when his previous employer, Westinghouse, confiscated the large equipment from his lab for nonpayment of loans. Upon order, the U.S. government demolished the tower in 1917.

These are but two stories that show Tesla’s commitment to using incremental failure as a stepping stone to success. Though it didn’t always yield success, the sum of Tesla’s work is, of course, legendary.