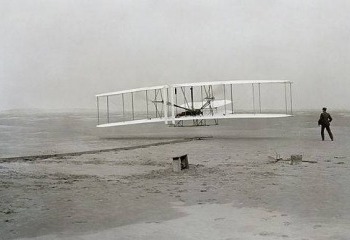 Failing for Success: The Wright Brothers

Orville and Wilbur Wright are the emblem of soaring new heights. That’s why the crew of Apollo 11 took a small piece of wood from the Wright Flyer, the first successful aircraft, to the surface of the moon. It’s also why two states – North Carolina, where the successful flight took place, and Ohio, where the Wright Brothers called home – officially honor the historic achievement with their standard license plates.

But the Wright Brothers wouldn’t have known any success if it wasn’t for their repeated and oftentimes painful failures. It took the self-taught engineers years and numerous attempts to get anywhere close to powered flight. And even when they were about to achieve success, unforeseen setbacks surfaced that brought them to the brink of yet another failure.

After years of experiments and studying other aviation pioneers, the Wright Brothers traveled to Kitty Hawk, North Carolina to test out a new “glider” they had developed. Like a piloted kite, the glider used wind to sustain lift and whoever was piloting lay prone to avoid any excess drag. Unfortunately, sometimes the tests failed due to unexpected gusts and other hindrances. Nonetheless, even if it took time to repair the glider, the brothers never let a crash set them back. Instead they took what they learned to make their prototype more effective.

This was evident for their second glider. Once they went back to the drawing board, they made a few changes to the design like increasing the wing size. Though the glider showed some signs of improvement, it had difficulty with lift and was nearly impossible to control. In 1902, after even more failure followed by changes to their plans, they developed an improved glider that was easily controlled and could sustain a lift for an extended period of time. But this wasn’t enough of a triumph for the Wright Brothers – they wanted to fly a powered airplane.

The first thing they needed was an engine, but they couldn’t find a design that was light enough. So, amazingly, their mechanic Charlie Taylor simply made one himself. Following some more tinkering, the Wright Brothers were confident they could reach their goal. But then even more setbacks appeared: unforeseen technical problems and repeated bad weather caused three frustrating months to pass before they could test out the design.

When the time came, a coin toss ensued and Wilbur won, but the first attempt didn’t go as planned – after 3.5 seconds in the air, the plane stalled and crashed into the sand, damaging a key component of the aircraft. Three days later, once the component was repaired, Orville was able to take control and give their design another shot. It wasn’t pretty, but he sustained a solid 12 seconds of powered flight – the historic foundation for the future of human flight that today powers a global economy and inspires the imagination of young aviators everywhere.

It’s just another example of how failure can lead to enormous success.