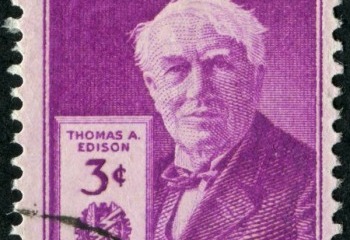 “I have gotten lots of results! I know several thousand things that won’t work!” – Thomas Edison

As one of the most recognizable names in inventive history, Edison’s numerous innovative ideas and creations are legendary. He held more than 1,000 patents, a record only broken very recently, and developed ground-breaking technologies like the electric light bulb, phonograph, batteries, and so much more.

But despite his outstanding success, Edison failed frequently. In fact, it sometimes took thousands of attempts – literally – to perfect his experimentation. That was exactly the case when Edison was working to devise a novel storage battery. According to his close friend Walter S. Mallory, Edison had already tried 9,000 experiments and hadn’t yet found a solution. When Mallory commented about the lack of results, Edison promptly responded, “Results! Why, man, I have gotten lots of results! I know several thousand things that won’t work!”

Here are just a couple of Edison’s other failures, which ultimately became footnotes of his wildly successful career:

During the late 1880’s Edison was very concerned about the cost of iron, which was impacting the price of some of his inventions, like the electric generator. After some thought and research, he believed he found a solution: build a separation plant to pulverize low-grade iron ore and produce an abundant supply of iron.

Once the massive plant and supporting town was built, things didn’t quite go as planned. The machines disastrously failed, causing Edison to lose a substantial amount of money. A few years and a new successful design later, the entire endeavor still failed when iron extractors began to mine the Mesabi iron range in Minnesota, cutting iron costs so dramatically that Edison closed his plant entirely.

Nonetheless, there was a major silver lining in the failure. Edison took what he learned and later applied some of the methods to concrete production, which ultimately became one of his major entrepreneurial successes.

Today’s cable news programs may often discuss the inefficiencies of the United States Congress, but Edison was dreaming up a solution almost 150 years ago. Just like today, the Senate voted on issues one by one – an inherently inefficient process that Edison wanted to change. As it turns out, the device Edison created, the electrographic vote-recorder, was one of his first patented inventions.

Though the recorder could have saved hours of procedural time during Senate sessions, Edison’s creation was soundly rejected when he proposed it in Washington D.C. because political leaders worried that it would subvert the entire legislative process.

Even with disappointment, Edison took the failure in stride. From then on, he declared that he would focus his ideas and inventions on filling gaps or opening new opportunities in the marketplace. Historian Leonard Degraaf puts it this way: “He wasn’t just going to invent things for the sake of inventing them.”