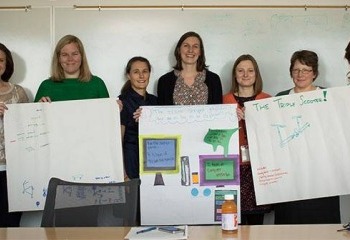 “Has anyone ever told you that girls are not good at science, technology, engineering or math? By the time you leave today, I want you to bust this myth wide open.”
This was the challenge that IV President and COO Adriane Brown tasked to hundreds of girls attending the Expanding Your Horizons (EYH) conference in Seattle this spring.

Photo: Women from Intellectual Ventures show some of the ideas — infographics and new scooter inventions — girls created during Expanding Your Horizons.

During her keynote, Brown asked girls to imagine themselves as future business leaders, engineers, or inventors. Then, in traditional EYH style, girls met female role models who helped them transform imagination into real-world possibility.

Through a series of hands-on workshops that paired elements of science, engineering, technology, and math (STEM) with modern-day careers, girls became STEM professionals for a day. Some were biologists or project managers; others were graphic designers, architectural engineers, or patent examiners.

For the third year in a row, IV women were among the role models hosting workshops.

IV’s Beth Schubert and Eleanor Goodall taught girls how new ideas are developed and patented during their workshop. “Girls were challenged to invent a new scooter design and submit a mock patent application,” said Goodall. Then, each patent application was reviewed by a panel of thirteen and fourteen-year-old peers to determine whether the inventions were new, useful, and non-obvious. “The girls were generous; everyone’s scooter design was ‘granted’ a patent.”

Claudia Myers and several of her IV colleagues invited girls to invent a technology or product solution to address the problem of teens not getting enough sleep.

“The goal of our workshop was to teach girls to solve a problem using different approaches,” said Myers. “Girls came up with ideas that ranged from sensory deprivation masks to wearable computers that monitored teen’s caffeine intake.”

At the end of the EYH conference, whether the girls imagined themselves as computer programmers, robot engineers, heart surgeons, or none of the above, each girl had newfound confidence to push past stereotypes and see themselves as smart, capable, STEM professionals.

It won’t be a surprise if one or two of them become the next Grace Hopper.