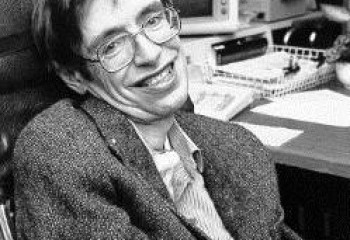 Happy Birthday to The Explorer Who Knows No Bounds

This week at IV, we celebrate the 75th birthday of a scientist who fundamentally changed how we think about the universe and has become an emblem of intellectual curiosity for scientists, thinkers and innovators alike.

“From his wheelchair, he's led us on a journey to the farthest and strangest reaches of the cosmos. In so doing, he has stirred our imagination and shown us the power of the human spirit here on Earth.” – President Obama awarding Stephen Hawking the Presidential Medal of Freedom in 2009

Throughout his life, Hawking has inspired scientists and innovators across generations, including Intellectual Venture’s co-founder Nathan Myhrvold. Hawking was one of Nathan’s first mentors when he was a postdoctoral fellow at Cambridge University.

Stephen Hawking is the former Lucasian Professor of Mathematics at the University of Cambridge, with the likes of Isaac Newton and Charles Babbage. He is also the author of the international bestseller A Brief History of Time as well A Briefer History of Time and a series of children’s books. He is currently the director of research at Cambridge’s Center for Theoretical Cosmology.

Hawking has dedicated his life to exploring the fundamental laws that govern the universe. He was the first to set forth a theory of cosmology explained by the theory of relativity and quantum mechanics, and his pioneering work in physics and cosmology is among the greatest scientific discoveries of our time.

Most remarkable about Hawking, however, is perhaps not his scientific contributions themselves, but his unwavering pursuit of knowledge and his strength in the face of adversity. Hawking was diagnosed with Amyotrophic Lateral Sclerosis, or Lou Gehrig’s disease, over 50 years ago. The diagnosis usually means one has years to live, not decades. Despite his diagnosis, Hawking continued to explore the world around him and has remained steadfast in his goal to achieve complete understanding of the universe.

Hawking once said, “Be curious. And however difficult life may seem, there is always something you can do, and succeed at. It matters that you don't just give up.” It is this tenacious curiosity and spirit of exploration that inspires us at IV to continue to explore big ideas. So today and every day, we recognize Hawking and other great thinkers who embody this spirit and remind us just how far determination and curiosity can take us.

Be sure to check out Nathan Myhrvold’s birthday wish to Stephen Hawking and follow him on Facebook via this link.