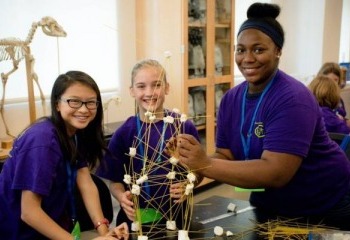 As IV President and COO Adriane Brown once said, “it is important to recognize that we as a company, a country, and as a world community must do better to encourage women to pursue educations and careers in STEM fields.” Intellectual Ventures is committed to adding more women voices to the world of invention. That’s why we have partnered with Expanding your Horizons Network (EYHN), a nonprofit organization dedicated to providing gateway STEM experiences to middle and high school girls that spark interest in STEM careers.

Through its worldwide network of 100 STEM conferences, EYHN opens the minds of young women to the possibility of careers in math and science. At these conferences, girls meet and interact with female adult STEM role models and participate with their peers in hands-on STEM activities. The conferences consist of customizable workshops based on each girl’s specific area of interest.

Every year, EYHN conferences helps 24,000 girls in 33 states and three countries to recognize their potential as powerful thought leaders and innovators in the field of STEM.

IV has worked with EYHN for 3 years, supporting several local chapters in and around the Seattle area. Most recently, IV employees led hands-on workshops for middle school and high school students at Bellevue College and Seattle University, giving girls the opportunity to learn how STEM has enriched the lives of innovators on the IV team. Past IV sponsored workshops have included Invent This! Learn how great ideas are developed and patented hosted by volunteers from the Invention Science Fund and Epidemics! How diseases spread and what we can do to stop them hosted by volunteers from the Institute for Disease Modeling.

According to a study done by the Girl Scout Research Institute, more than half of all girls say that girls their own age don’t typically consider a career in STEM. Further, 57% of all girls say that if they went into a STEM career, they’d have to work harder than a man just to be taken seriously. These negative stereotypes often prevent young girls from exploring STEM careers. IV has teamed up with EHYN to break down these barriers because we recognize that in invention, more brainpower and more voices cultivate stronger ideas.