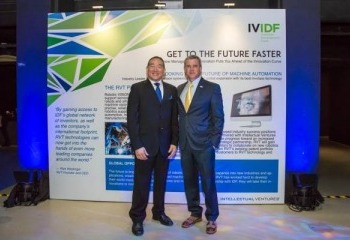 At Intellectual Ventures, we believe that global networks of inventors are a more efficient and productive method for generating new inventions to solve the world’s most pressing problems. That’s why last week in Singapore, we were proud to announce the creation of the Technology Development Center (TDC), with support from the Singapore Economic Development Board (EDB).

As part of the launch of the TDC, we hosted a conference on open innovation in Singapore with influential speakers from government, academia and industry. The event took place at Singapore’s Red Dot Museum and had more than 150 attendees representing many Singaporean and multinational companies. In addition, there were many international guests from other parts of Asia, Europe and North America.

IV founder and CTO Edward Jung opened the conference by talking about his belief that invention can no longer just be the work of the proverbial inventor toiling away alone in their garage. Our invention network, IVIN, operated by IV’s Invention Development Fund , now has more than 10,000 members around the world including ~7,000 inventors and a wide range of other technical experts involved in technology development, invention review and patenting. The conference guest of honor, American ambassador to Singapore, the Honorable Kirk Wagar, joined Jung on stage to congratulate IV and discuss his belief that the TDC will be a great tool to wed traditional American inventiveness and IV’s global reach with Singapore’s regional economic leadership.

Moving forward, the TDC intends to take a small sub-set of the new inventions our global invention network generates and create prototypes or conduct additional scientific testing on them. This will better allow us to create packages of technology for our customers that contain not only an invention disclosure or a patent application, but also a working model or a set of baseline scientific data. We have already identified three projects that the TDC will immediately begin work on.

The launch of the new TDC in Singapore is the first in a series of global efforts we are undertaking in places such as Turkey and Germany. And the innovation conference was just one of several important events we hosted in November! Last week, we announced the grand opening of IV’s new lab space – an additional 33,000 square feet dedicated to helping global invention thrive.