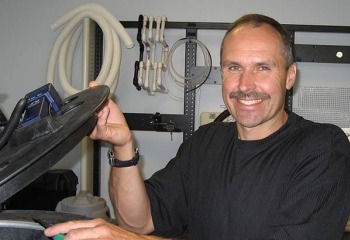 In a small cottage in the quaint community of Bobcaygeon, Ontario, a young Robert Dale Gunderman watched Apollo 11 land on the moon. Since that moment, his fascination with science and technology has been a driving force behind his ventures as an inventor and business owner.

Gunderman’s first job out of college was his own company; he started an automated testing business with a college roommate. Today he’s president and CEO of Hydratics® — a research and development company that is creating low-power desalination technology that turns saltwater into pure, clean drinking water.

Gunderman says that to be a serial inventor you need not only good ideas, but also the financial resources to turn ideas into reality. He believes in the value of patents as assets: They can be bought, sold, and transformed into the core of new startups.

“The ability to create an asset, monetize it, and feed the profits back into a business is a truly creative undertaking,” he says.

Gunderman founded Hydratics® from the monetization of — and investment in — patents. In 2009, he began discussions with a company that was divesting patents that were no longer essential to its business. He saw an opportunity to build a company around those patents, so he purchased them and used the sale of some of his own patented inventions to finance his new venture.

In the world of invention, exploring one idea usually leads to another. Thanks to continued investment in patented assets, Gunderman’s company is exploring offshoot technologies that could make agriculture more sustainable.

“At Hydratics®, we don’t want to be rigid in our approach,” says Gunderman. “If someone in our lab wants to take a detour, they go for it.”

Find out how a connection with Intellectual Ventures helped Gunderman reinvest in new technologies that could make a difference in the world, just as the moon landing did years ago.

Intellectual Ventures works with all kinds of inventors. Read their stories.