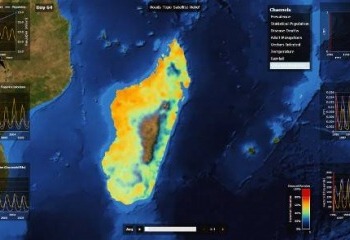 IV in the News: Institute for Disease Modeling

Recently, Philip Eckhoff, research scientist and IDM’s principal investigator, published a research paper he co-authored with fellow U.S. scientists and health officials in Nigeria studying historical polio caseload patterns and forecast future circulation of two types of wild poliovirus within districts in Nigeria. The paper, published in BMC Medicine, ultimately concluded that the modeling approach used by IDM for this particular study could be applied to other vaccine-preventable diseases for use in other control and elimination programs.

Philip also spoke with both KUOW’s The Record’s Ross Reynolds and Anna Azvolinsky at the Princeton Alumni Weekly about using computer modeling to eradicate infectious diseases in the developing world. Though optimistic about the probability of eradicating polio worldwide in the next five years and ending malaria in most countries in the next 20 to 30, Philip explained the importance of local level support in addition to the great work happening at IDM:

“No matter how many times we eradicate malaria or another disease in our simulation models, unless the recommendations are put into practice at the local level, we won’t effect change.”

So what began as a modest epidemiological modeling project has grown today to a multi-disciplinary team that is made up of more than 35 physicists, mathematicians, and software developers, who have been making significant strides in determining the combination of health policies and intervention strategies that can lead to disease eradication.  In a recent interview with The Seattle Times, epidemiologist Mike Famulare explains how this approach drew him to IDM in the first place:

“I can sincerely say that I work with unreasonably smart people, and we are more cooperative than competitive. I love this. In the big picture — if I do my job well — I make tiny contributions to the massive effort underway to improve healthcare and control preventable disease world-wide. Maybe I help life get a little better for a lot of people.”

For more on how IDM is helping solve some of the most significant global health challenges we face today, please visit the Intellectual Ventures Laboratory.