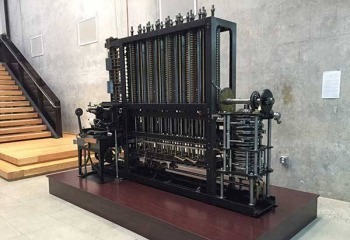 Visit the Intellectual Ventures Lab and you’ll find one of IV’s favorite inventions, the Difference Engine No. 2 or Babbage Machine. Consisting of 8,000 parts, weighing five tons and measuring 11 feet long, this particular invention is hard to miss. But its size isn’t the reason it has a home in the IV Lab foyer. The Difference Engine No. 2 is the earliest mechanical calculator and widely considered to be the world’s first computer.

In our early history, scientists, engineers and navigators had to rely on human calculation to perform complex mathematical functions. Teams of mathematicians or “human calculators” were charged with creating error-free tables of equations and data. The problem was that human calculators were not perfect. Human calculation proved to be both an inefficient and imprecise method for tabulating data.

In 1822, the brilliant mathematician and inventor Charles Babbage had a vision that changed the game forever. Frustrated by human error, Babbage designed the Difference Engine to automate the process of calculating mathematical functions. The engine was designed to calculate numbers using the method of finite differences. The big advantage of this method is that it uses only addition and takes away the need for multiplication and division which are more difficult to implement mechanically. The process breaks down a complex task subject to human error into bite size chunks that can be programmed to eliminate nearly all mistakes in calculation.

Though Babbage was responsible for the design of the Difference Engine, it would be another 153 years until it was actually constructed. In 2002, the mechanical calculator was built faithfully to Babbage’s original drawings. And for that, we have our co-founder Nathan Myhrvold to thank. Myhrvold not only funded a portion of the London Science Museum’s output mechanism for a working Difference Engine No. 2, but is also the owner of a Difference Engine No. 2—making the mechanical calculator showcased in our foyer one of the only two in the world.

It is difficult to imagine a world without Charles Babbage’s vision of the mechanical calculator. Without Babbage, would we be sending our kids to algebra class with human calculators this back to school season? Charles Babbage was capable of breaking down the complexities of our universe in to manageable parts. He is among a lineage of thinkers who revealed the computable nature of our world and serves as an inspiration for many of us at IV every time we walk through the IV Lab foyer and catch a glimpse of the Difference Engine No. 2.

For more of IV’s favorite inventions, check out our post on cipher machines and fire hoses.