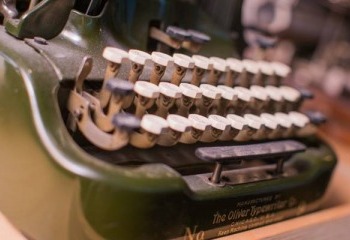 We believe that like ourselves, invention evolves. There are several examples of the evolution of invention at IV’s offices, including the antique typewriters in our lobby.

Photo: The Oliver Typewriter on display in IV's invention collection.

As you’re walking through our hallways, you’ll pass plenty of computers on our employees’ desks before coming to a row of inventions that — less than a generation ago — would have far outnumbered their digital counterparts in the average office building.

Perhaps this invention’s evolution is most evident through sound instead of sight. If you close your eyes in IV’s halls, you might hear the gentle typing on computer keyboards or the pleasant chirps of cell phones. You will not likely hear, however, the staccato click-clacking of typewriters.

While the printing press was invented in the 15th century, the first modern typewriter wasn’t invented until the mid-1800s. The 400-year wait can be explained by a number of factors, including that the printing press was born in an age of abundant cheap labor. Fast forward to the mid-19th century, where labor was scarcer and the industrial revolution was at its peak. It was time for an invention to expedite the production of the printed word.

After Christopher Sholes invented the first modern and commercially successful typewriter in 1866, a number of improvements were made to the model. Because the Sholes typewriter would jam due to quick typing, the keyboard was redesigned so that letters commonly used together would be placed apart. Look down at the left of your computer’s keyboard: the “QWERTY” design used today was born as a result of this typewriter improvement.

The Oliver Typewriter followed, invented by the Canadian Rev. Thomas Oliver in the late 1800s. This was the first effective “visible print” typewriter where its user could view a couple lines as they typed their manuscript. One of the typewriters in our hallway is the Oliver Company Model No. 9, which was produced in Chicago between 1915 and 1922.

As demand grew for the machine, so did its enhancements. Typewriters became more user friendly with softer keystrokes, better angles to the eyes and hands, and multi-colored ribbons. Shift keys were added, and then “shift lock” to spare your pinky finger from straining. Early electrical models began appearing as soon as the early 1900s, and typewriters were common in the workplace by the 1950s.

While the typewriter eventually conceded the spotlight to the computer keyboard, its legacy continues among its enthusiasts. We don’t blame them — even with its evolution concluding, the typewriter’s admirers will always prefer the music of click-clacks and dings and the heavy weight of keys beneath their fingers.