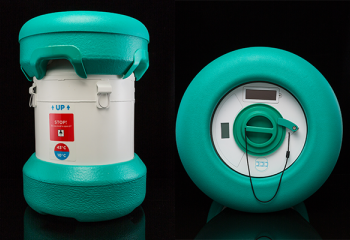 2015 brings two early and notable milestones for the Global Good and Intellectual Ventures Laboratory teams’ work to commercialize a passive vaccine storage device: a stamp of approval from the World Health Organization and branding transition to our manufacturing partner in China, AUCMA.

Despite immunizations being one of the greatest success stories in modern medicine, one in five children worldwide are still not fully protected with even the most basic vaccines. As a result, an estimated 1.5 million children die each year—one every 20 seconds—from vaccine-preventable diseases such as diarrhoea and pneumonia. Tens of thousands of other children suffer from severe or permanently disabling illnesses. [Source: Bill & Melinda Gates Foundation]

Immunization rates are lowest in rural areas, such as Sub-Saharan Africa, where poor infrastructure and unreliable power means life-saving vaccines are often spoiled or out of stock. Many a troubling story has been told of a mother travelling with her young child for miles on foot, only to be turned away at a health post that has run out of vaccines.

It was this issue of vaccine delivery that presented the inventors, rocket scientists, hackers, health experts and industrial engineers here at Intellectual Ventures (IV) with the type of problem that inspires them the most:

I’m proud to say the teams at Global Good and IV Lab are well on their way to answering ‘yes’ to both.

Over the past five years, both teams have worked hard to develop a device that can keep vaccines at the appropriate temperatures for a month or more with repeated vaccine retrievals and no need for electricity. In a rural health post, like the ones we have worked with in Ethiopia, Senegal, and Nigeria, that makes this passive vaccine storage device what Bill Gates has jokingly, but genuinely, referred to as the “keg of life.”

Significantly, the World Health Organization has designated our passive vaccine storage device  “prequalified”  under its Performance, Quality and Safety (PQS) program as well. PQS prequalification is a requirement for most governments in the developing world for procurement and implementation of a device, and it represents a significant seal of approval for real world conditions.

This PQS prequalification also helps our commercial partner, AUCMA, to move the device beyond manufacturing and into distribution in the communities with the lowest rates of vaccination. Based in China, AUCMA is one of the country’s largest refrigeration manufacturers, and critical to our efforts to catalyze the market around a commercial passive vaccine storage device. So much so, in fact, that we together have developed a brand for the device for AUCMA to take to market, called the Arktek™. (Apparently, passive vaccine storage device isn’t the catchiest or most easily translated term. I can’t imagine why!)

In the coming months, you’ll start to see the Arktek brand appear in more of Intellectual Ventures’ and AUCMA’s marketing, but more importantly, I hope you will see this life-saving device in more of the countries that need it most.