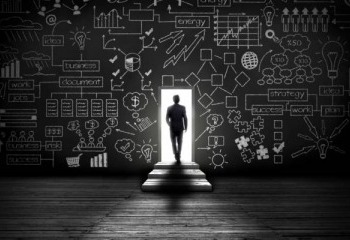 For more than a century now, the United States has been the most inventive nation in the world. And for the past century, the title of greatest—or in any case, most prolific—American inventor was held by Thomas Alva Edison. Most everyone knows that Edison invented the phonograph, the movie camera, and of course the incandescent light bulb, which to this day we still use as an icon to represent a bright new idea. Actually, Edison and his co-inventors came up with scores of different inventions for these things, as well as for better telephones and numerous ways to generate, transmit, and store electricity. They patented early and often. Between 1869 and 1933, Edison racked up an astonishing 1,084 U.S. utility patents, a record for American inventors that held for 82 years. Until now.

This summer, Lowell Wood surpassed Thomas Edison’s record with the granting of Wood’s 1,085th patent by the US Patent and Trademark Office. To mark this very special occasion, our inventor-in-residence was recently profiled by Bloomberg Businessweek’s Ashlee Vance, who noted of Lowell, “The scope of his inventions is insane… he’s just this guy who is compelled to solve problems and invent new ideas.”

As impressive as Lowell’s latest feat is, it’s not the half of it—literally. When Edison received his 1,084th patent, he had been dead for more than a year. Wood, in contrast, is only 74 and still going strong: he is named as inventor or co-inventor on about 2,500 U.S. patent applications that are currently pending, and he is still generating hundreds of new inventions each year. Some of the pending applications will be combined, and others will die before they are granted. So it seems almost certain that Wood will eventually double Edison’s record. It probably won’t even take that long: Wood now averages about one new U.S. patent granted every day of the week, so he could reach 2,186 by mid-2018—if the patent office can keep up with him!

Like Edison, Wood has mastered the art of invention, and his patents are of high quality. I know this because the great majority of his patents were developed in collaboration with Intellectual Ventures, so they have passed through the rigorous drafting and quality-control processes that have made us the global leader in the business of invention.

What’s the secret to being the nation’s most productive inventor? Well, it doesn’t hurt to start off by being one of its sharpest and most erudite physicists. But that’s not enough. Albert Einstein had only two U.S. utility patents, after all. The real secret, I believe, has three parts:

IV helps Wood, and dozens of other inventors like him (well, approximately like him—Lowell is one of a kind) to succeed by giving them the environment, the team, and the support they need to focus on inventing. I and other technology heads host all-day “invention sessions” that accomplish that first goal. Many of these invention sessions include not only Lowell Wood but also his wife Yuki Ishikawa, who is the second most prolific female inventor in the U.S., and their daughter Victoria Wood, who at age 23 already has 323 U.S. patents and is on track to catch up with her parents.

Frankly, it is amazing how many truly novel and useful ideas can come out of these inventions sessions. But it’s also a crucial part of our work at Intellectual Ventures that those great ideas then move into a carefully crafted evaluation process, in which subject-matter experts work with patent agents and attorneys to figure out which ideas are patentable and then draft high-quality applications. Other teams shepherd those applications through the USPTO review process, package the resulting patents into portfolios that make sense to manufacturers and services providers, and license the technologies so that they make it to market and into our homes and businesses as quickly as possible.

Our system is really effective, which is why 11 of America’s top 50 inventors currently work with IV. In order of their U.S. utility patents granted (as of October 13), they are:

Just as Thomas Edison’s inventions shaped the 20th century, we believe that new ideas generated by Wood and other IV inventors are going to save lives and fundamentally change entire industries in the 21st century and beyond. We can already point to numerous examples in which this is happening.

Immunizations are one of the greatest success stories in modern medicine, yet roughly 1.5 million children still die needlessly each year from diseases that could be prevented by vaccination. Why aren’t all these kids vaccinated? One reason that vaccines go bad unless they are chilled to precise temperatures, something that is hard to do in places where infrastructure is sparse and electricity is unreliable. Using technology invented by Wood and others at IV, Arktek solves that problem by keeping vaccines and other medicines at the proper temperature for 30 days or more in the world’s hottest environments, without any need for external power.

Prevention and detection of malaria

In 2013, about 200 million people fell ill with malaria, and more than half a million died of the disease. Most of the fatalities were children; in Africa, a child dies every minute from malaria. Wood and the IV team have invented a number of methods to prevent, detect, and control this deadly mosquito-borne disease.

Photonic Fence (patent #8,705,017): Low-cost sensors and lasers are repurposed to make a “fence” of light beams that detects, tracks, identifies, and kills only targeted species of insects, such as mosquitos. The technology was developed as a tool to help eradicate malaria in developing countries, but it can also be used in richer parts of the word to protect people from mosquitos carrying West Nile virus or to shield citrus groves from fruit-destroying psyllids without the use of pesticides.

Fast, non-invasive diagnostics (patent #8,798,699): By scrutinizing the blood vessels in the retina, this technology can detect a malaria infection without the need to draw blood. It works in minutes rather than days.

Better laboratory detection of malaria (patent #8,504,129): The parasite that causes malaria produces crystals of a substance called hemozoin. This invention uses pulses of laser light to detect those crystals quickly and with high accuracy. Outfitting standard microscopes with such detectors could greatly improve malaria diagnostics.

Travelling-wave reactor (TWR) technology could deliver safe, affordable, reliable, and clean energy to a growing world. Developed by IV and commercialized by spinout TerraPower, the TWR will consume depleted uranium—a waste byproduct of current nuclear systems—as its main fuel. There is enough depleted uranium already stockpiled inside the U.S. for a fleet of TWRs to power every home in America for more than 700 years.

People have tweaked and improved – but never replaced – the centuries-old steam turbine technology used to turn heat from oil, gas, coal, and nuclear power into electrical energy. This engine will bring improved electricity generation to the world.

Many of the biggest breakthroughs in the 20th century were enabled by new materials, such as stainless steel, composites, and nylon and other plastics. We believe that in the 21st century, metamaterials will similarly prove to be game changers in many industries, starting with communications and imaging. Metamaterials are built up from active components, such as antennas and electronics, in such a way that the whole device takes on new properties.

IV has some of the world’s leading metamaterials experts on its invention team, which includes Lowell Wood and collaborators at Duke University. Their inventions already being developed by three spinout companies: Kymeta, Evolv, and Echodyne. This new class of artificial materials is already enabling rapid advances in smart and autonomous vehicles, security scanning and high-speed Internet communication at sea, in the air, and in space.

We all would like to be able to power and charge our devices without being tethered to a wall socket. IV has invented systems for wirelessly distributing energy to multiple gadgets, even if they are moving. Our guard-beam technology guarantees safety by shutting off the power whenever any object wanders too close to the beam.

Too many American soldiers returned from Iraq and Afghanistan with traumatic brain injuries from explosions. Nearly 330,000 such injuries have occurred since 2000. IV has invented a way to improve helmets and other body armor that reflects or deflects the shock waves from an explosive device away from a soldier’s body. Variations of this technology could also help protect athletes against concussions.

Thomas Edison once said, “I find out what the world needs, then I proceed to invent.” Congratulations to Lowell Wood and the rest of the IV invention team. You have invented a LOT of things the world needs!