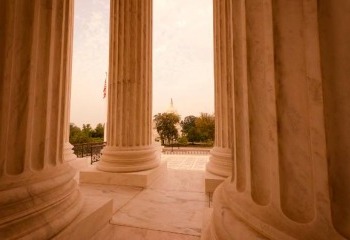 In my previous post, I described a constructive proposal in Congress to attack the mass-mailings of “demand letters,” but patent reform isn’t just happening in the halls of Congress. The court system is pushing through another series of reforms that will make it harder and riskier for so-called “trolls” to file frivolous patent-infringement lawsuits.

Earlier this month, the Supreme Court handed down two decisions that create more clarity about patent validity and will make it easier for companies to defend themselves against charges of infringement. Indeed, The New York Times praised the decisions in an editorial. In one case, Nautilus Inc. v. Biosig Instruments, the high court made it easier for a defendant to show that a patent is invalid because of its “indefiniteness” – meaning that the patent is too vague to explain the scope of the invention. It’s an important issue, because critics have charged that many patent claims are vague and overly broad. Until now, courts have held that a patent flunks the “indefiniteness” test only if the scope of the claim is “insolubly ambiguous.” The high court said that bar was too high, and set a new standard based on failing to provide “reasonable certainty” to those who are skilled in the art.

In April, the Supreme Court handed down two decisions that are all but certain to increase the financial risks for people who file frivolous patent lawsuits. In those cases, Highmark Inc. v. Allcare Health Management Systems and Octane Fitness v. Icon Health and Fitness, the court gave judges more discretion to make the losing side pay the winning side’s attorney fees.

And just this week, the Supreme Court delivered another important ruling, this time on the patentability of software. That case, Alice Corporation v. CLS Bank International, provides further guidance on the highly complex and controversial question of whether a software program that automates a business method truly counts as an invention and should be eligible for a patent.

All of this activity, in Congress and in the courts, shows that real patent reform is advancing – without jeopardizing the crucial role of patents in sparking invention.

For much of the past year, powerful lobbying groups have pushed for sweeping laws based on caricatures of “trolls” and other villains. The result was a raft of proposals that sparked serious objections from universities, pharmaceutical firms, biotech firms, independent inventors and entrepreneurs. None of these represent what most people think of as “trolls,’’ but they are major engines of American invention.

After six months of trying but failing to reach agreement among the many different stakeholders, Senate Judiciary Committee Chairman Patrick Leahy put his proposed bill on hold in early May.

But the courts clearly recognize that there are bad actors who exploit weaknesses in the legal system, and they are making fixes that will have a big impact.

This new path is precise, balanced, thoughtful and ultimately better for the nation.