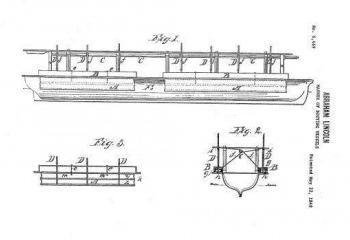 President Lincoln and the “Fire of Genius”

In honor of Presidents Day, it seems fitting that we profile the only president to ever hold a patent: President Lincoln. Lincoln shared a common ethos with many inventors – he relished the opportunity to design new objects, especially those that had the potential to improve an industry or make work more efficient.

In Lincoln’s early years, he worked on a ferry boat on the Mississippi that ran aground multiple times. Inspired by the technological challenge the issue presented, he designed a device to buoy vessels over shoals. His system allowed the crew to inflate waterproof fabric bladders when they needed to lift the ship over an area of shallow water. On May 22, 1849, he was granted patent No. 6,469 for the idea. Proud of this accomplishment, Lincoln stated that the patent system “added the fuel of interest to the fire of genius.”

Like many inventors, despite having a day job, he worked on his invention in his spare time. He spent about a year in between sessions of Congress developing a solution to the river navigation issue. He also received advice from someone more experienced in the field; Walter Davis, a Springfield mechanic, assisted Lincoln with building his scale patent model.

Though President Lincoln’s invention was never manufactured, he embodied the curiosity and tenacity that has fueled American innovation for centuries.

Interested in hearing similar stories from inventors in IV’s network? Check out our Behind the Breakthrough series for more about what inspires new inventors today.