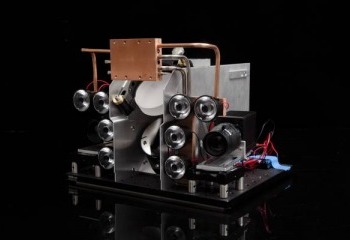 Story Behind the Story: More on IV’s Photonic Fence with Arty Makagon

From Star Wars and Star Trek to James Bond and the Terminator, lasers have become a staple of the science fiction and action film worlds. But since their invention 57 years ago, the day-to-day use of lasers is no longer fantasy. Today, lasers find powerful and wide-ranging use in science, medicine, the military and now, even disease control.

Global Good’s Photonic Fence, or “insect-zapping laser” as described in a recent MIT Technology Review article, has extended the potential for lasers even further. Though originally developed to control vector-borne diseases like malaria, the technology is now being deployed to the agricultural battle ground of Florida to engage another potent pest. The enemy: an insect invader destroying the sunshine state’s oranges.

To get the inside scoop on the battle-ready weapon, we sat down with Photonic Fence technical project lead Arty Makagon to discuss how the technology works, how it’s progressed since its first generation and why it has the power to defeat the Asian citrus psyllid.

IV Insights: How far have you come since the first generation of the Photonic Fence?

Arty: We started with the question – can [the device] see far? We checked that off with our first-generation prototype. For Gen-2, we wanted to know - can we see targets both near and far? We started climbing the technology ladder. Now, with Gen-3, can we see near and far and kill and start hitting our performance benchmarks on controlling the pest we’re after.

We’ve also worked to understand and fine-tune the lethal mechanism so that when the bugs are killed, they don’t even look damaged. We have videos of earlier tests where you can see via high-speed camera that we burned the wings off mosquitos. That’s neat to watch, but it turns out that it’s gratuitous overkill – and so that isn’t how the machine works now. After we shoot a bug, when we look at it under a microscope, we can’t tell where it was shot – there are no singe marks and no gaping wounds.

So how did the bug die? We sent samples to the University of Washington histology lab and found out that essentially we end up cooking the bug. Our laser acts like a very precise, “short-wavelength microwave oven”. When you look at a cross-section of a chicken breast cooked in a microwave and a cross section of a bug dosed with a laser, they essentially look the same.

What’s the big deal about the Asian citrus psyllid?

The psyllid is a problem that’s screaming for a solution. Since its high 15 years ago, there’s been a 60 percent reduction in total citrus production in Florida. You may not have noticed, but the makeup of your carton of orange juice has been changing over the years as the varieties of oranges that are best suited to juice production are dying off.

The Asian citrus psyllid is also particularly insidious because it spreads a virus and can infect an entire tree rather than ruining individual pieces of fruit like other pests. Because the psyllid is so destructive, farmers have been trying all kinds of creative methods to control the pest. They’ve deployed everything from parasite wasps that eat the early stage psyllids to planting sacrificial species – like guava – that the psyllids appeared to prefer. But despite these efforts, there are bunch of now-derelict groves in Florida that are just so infested that they can’t be used.

Other citrus growing states are on the cusp of having a big psyllid problem, but there’s nothing they can do about it. Lots of places are spending a lot of money on trying to prevent the psyllid, but with very little success. The psyllid and the virus they spread are both in Texas and California. Growers are trying to monitor how the psyllids are spreading, but even those mechanisms aren’t terribly effective.

In short, we’re working in this area because this is not a Florida problem or even a U.S. problem – the Asian citrus psyllid is a global problem. And no one has found a solution to this problem, short of “run away and plant in regions less hospitable to psyllids.”

How do people react when they see the Photonic Fence in action?

I think the best way to describe it for first-time viewers is disbelief.

We do two kinds of demonstrations at the IV Lab with the Photonic Fence – a tracking demo and a lethal demo – and both can be kind of dumbfounding in different ways. For the tracking demo, you can watch a screen that shows what’s happening in real time for a box of bugs that’s 60 meters away. It takes a minute for the brain to process that the machine is seeing something that would be effectively impossible to see with the human eye.

For the lethal demo, you start with a box of 25 mosquitos and within a few seconds, there are 25 mosquito corpses on the floor of the box. This also takes a minute to register, because you can’t see anything except for mosquitos falling to the ground because the laser in our system is outside of the visible range.

Missed the original story? Check it out on MIT Technology Review. And stay tuned for more “behind the interview” information from our experts on Insights.