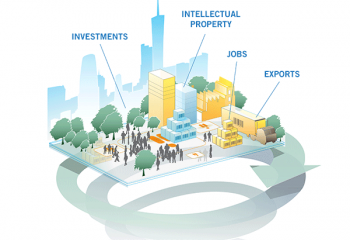 The Next Age of Invention

"Invention” is a loaded word. It recalls the historical concept of the lone genius perfecting an idea in the basement. And it’s true that isolated efforts gave us many of the great innovations of the late 19th and early 20th centuries: cars, television, antibiotics, the first CPU and open‐heart surgery, to name just a few.

But the old model of invention has a problem with scale. It can’t solve complex, long-term problems like the healthcare crisis or global warming. A “lone genius” can’t curb a flu pandemic, feed a chronically malnourished nation, bring major gains in healthcare and income to seniors or create smart and sustainable urban centers.

Instead, solving long‐term, large‐scale problems requires cooperation among a host of entities, including inventors, investors, big companies, small companies, governments, standards, research organizations and so on—all of the players involved in making great ideas work in the real world.

I lead a team at IV that is building blueprints for large‐scale, long‐term innovation in fields such as transportation, healthcare, communications and construction. Each of these Innovation MegaProjects (IMPs) is designed to create opportunities to license IP at volume while solving complex global problems. Like most IV efforts, this relatively new project takes a long-term view of innovation that, once executed, will take several years to mature. Ultimately, we see IMP and similar projects as a framework for what I call the next age of invention: a new model for innovation that is targeted, collaborative and guided by a coherent vision of technological progress.

In the next age of invention, the spark of individual genius is necessary, but not sufficient, to effect global change. Twenty‐first century inventors must be driven by a defined purpose: by the matrix of problems, markets and capital demanding solutions. No longer solitary, underfunded and under-resourced, next‐generation inventors will be embedded in a network of peers, investors, manufacturers and customers. They’ll have clear goals and new tools, such as social networks, collaboration infrastructure and inexpensive prototyping, as well as a long‐range plan: an overarching vision of progress that not only informs the efforts of the individual players but inspires them, too.

Those are the kinds of visions that our team is building now. In IMPs, IV will serve as an Innovation Architect, supplying the guiding blueprint of change, and connecting and coordinating the people, groups, technology and capital required to deliver it. Each vision represents a collaborative, targeted model for technological progress and for global innovation economies that keep billions of dollars in play for a decade or more.

Importantly, IMPs align the incentives of all the participants in these economies. The inventors who take part know their ideas stand a good chance of being made into products. The companies that sign up have much better odds of selling their products and services. And partner governments, which often spend billions of dollars on ongoing infrastructure and economic development projects with only modest, one‐time returns, can instead see ongoing revenue from a one‐time investment: the multiplier effect of a self‐sustaining IMP economy.

An historical example of this model of innovation is the Apollo space program, which created a $25 billion (more than $150B in today’s dollars!) innovation economy and put a man on the moon in less than a decade—thanks to the cooperation of government and industry, the individual and the team.

On a much smaller scale, IV is practicing the new model of invention through Global Good, an in‐house effort guided in part by Bill Gates to invent technology that saves lives in the developing world. To address disease pandemics, for example, IV scientists and inventors built a general framework of the elements of infectious disease and then broke it down into subsets of problems that are ripe for innovation. We chose specific problems and plugged into networks of experts and advanced technology to solve them. IV inventors worked with computer scientists, physicists, biologists and epidemiologists, for example, to innovate a method of refrigerated storage that can keep vaccines cold for months in the absence of electricity. When the technology is ready, Global Good will reach out again, engaging with businesses, ministries of health, non‐governmental organizations and other strategic partners to deploy it in the field.

That’s targeted, collaborative invention guided by a broad vision—a model for the kind of progress IMPs will achieve on a much larger scale in the coming decades. Great ideas can still bring useful, productive and profitable change to the world at large. But the pioneers of the next age of invention need to think big.