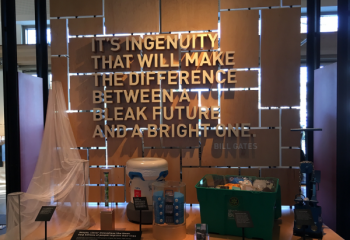 “It’s ingenuity that will make the difference between a bleak future and a bright one.” – Bill Gates

This quote hangs at the Bill and Melinda Gates Foundation Visitor Center along with a display of inventions making a worldwide impact, including Global Good’s Arktek™. But beyond its role as a backdrop, the quote embodies the ambition at the heart of invention – to create ideas that move society forward and improve lives. This month, the links we’re loving tell tales of inventors fostering big change through big ideas.

Global Good won the USPTO Patents for Humanity Award for its invention of Arktek™ – a device which can keep vaccines cool for more than a month with no power and is helping to save lives in countries with the lowest immunization rates in the world.

IV metamaterials spinout Echodyne announced the successful test results of its new detect-and-avoid radar technology, which can “see” both moving and stationary objects.

Global Good recently worked with Worthington Industries and the Indian Oil Corporation to launch its AI Shield in Tanzania and India, respectively. The technology can help Tanzanian cattle and dairy farmers by improving the process of livestock breeding.

Along with top thought leaders in Seattle, Senior Vice President of Global Good, Maurizio Vecchione spoke with Reuters on his view for the best approach to eradicating malaria.

IV President and Chief Operating Officer Adriane Brown was appointed to both the Washington Research Foundation’s (WRF) and Allergan, Plc’s board of directors.

Global Good announced a new partnership with the Feinstein Institute and Sanguistat to find a solution to the leading cause of maternal deaths worldwide.

Scientific American provided insight into how to solve America’s STEM education gap with perspectives from educators, entrepreneurs and government employees. Want to learn more? Explore IV’s own approach through its partnership with Expanding Your Horizons Network.

This teen’s invention helped give his friend a voice and has the potential to help those with disabilities to communicate.

Computing pioneer and electrical engineer Jay W. Forrester died this month at 98 and will be remembered for “creating an entirely new way of thinking.”

This month, President Obama awarded 21 Americans who have “helped push America forward” with the Presidential Medal of Freedom. Of the 21 recipients, five have made contributions in tech and three of those are women.

Want more News You Can Use? Follow us on Twitter and get the good stuff in real-time.