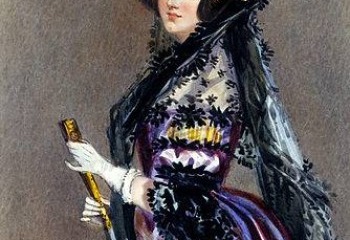 Computers have become such an integral part of our daily lives, it is difficult to imagine a time when their only use was thought to be solving math problems. In the early 19th century – well before the advent of innovative mouse technology or even typewriters – it was widely believed that computers would never have a use beyond crunching numbers.

It turns out it was a visionary woman – Ada Lovelace – who was one of the first trailblazers to challenge previously held conceptions about computers’ limitations.

Lovelace was a brilliant mathematician, recognized as the world’s first computer programmer and deemed the “Enchantress of Numbers” by an inventor of the earliest computer, Charles Babbage, himself. Though Ada Lovelace was the Countess of Lovelace, she has become widely known for her pursuits beyond her role as an English noblewoman.

After meeting Babbage, Lovelace grew fascinated with his work on mechanical computers, particularly his second invention, the Analytical Engine. (Did you know his first invention was the Difference Engine No. 2 – one of our favorite inventions displayed at IV headquarters?) It was Lovelace’s work with Babbage that made the invention of the Analytical Engine possible.

Lovelace’s notes on the Analytical Engine include the first algorithm intended to be carried out by a machine. She also boldly predicted that future versions of Babbage’s engine could be programmed to conduct scientific research and compose “elaborate and scientific pieces of music.” The idea that computers could be programmed to manipulate symbols and transcend their use as calculators was far ahead of her time. Lovelace’s original vision of the use of computers for both calculation and computation mirrors our reality today – nearly 200 years later.

Lovelace’s display of bravery in expressing a groundbreaking idea is a common characteristic among so many successful inventors throughout history and today. Lovelace was also a bold trailblazer for women inventors, read about other women inventors who have paved the way here.