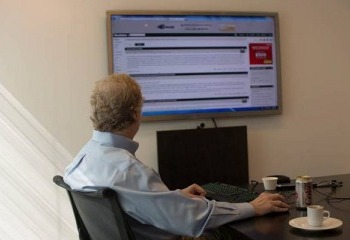 Yesterday I took part in a live Slashdot Q&A. For those of you who aren’t familiar, Slashdot is a lot like the Roman Forum. Its online citizens are a lively and opinionated group and they don’t shy away from taking on topics, companies or people who intrigue or irritate them.

In particular, the Slashdot community is comprised predominantly of dyed-in-the-wool open source advocates. Given my strong pro-patent views, my role as CEO of Intellectual Ventures (IV), and the fact that I spent much of my earlier career at Microsoft, my appearance raised a few eyebrows. To be honest, even I was surprised when Slashdot extended the invite. “They know it’s me, right?” I asked.

Many people -- including some of our local tech press asked whether I had lost it for agreeing to take part at all, drawing references to lion’s dens and other less hospitable places that people don’t willingly enter. But if you know me and you follow my business, you have to know by now I am used to controversy. I wrote about it in Harvard Business Review, and have spent many years in the hot seat explaining why I think what we’re doing at IV is so important for invention, inventors and the future of innovation.

I’m happy to say I survived the Q&A intact. I even enjoyed it. While there were the typical emotional questions I’ve come to expect, there were also some provocative questions about the goals of my business and how it feels to be at odds with an industry I support. Slashdot was kind enough to offer me a chance to answer some questions in-depth beforehand. This was particularly appreciated because I know my company is hard to understand and I wanted to take some time on the responses to questions like:

But really one of the most important reasons why I participate in forums like this is for the second takes. After my live Q&A, our website saw a surge in Slashdot-referred views of our job postings. If you were to ask me whether I’d be interested in hiring more passionate creators and debaters of innovation at IV? I’d say, “Yes, please!”

In the end, while I acknowledge that I wasn't out to change minds or "convert" anyone, I thought it best to take part in the debate, hopefully advance it past speculation, and provide a place where I could outline our views in a lively forum. Too often ideological discussions can devolve rapidly into mud-slinging. But as I said in my responses, we have more in common than one might think. Without the hackers and the makers, the invention market wouldn't be where it is today — a place where people dare to tackle insurmountable problems with unknown, unconventional and even unpopular solutions.

So, if you want to know why I think a market for invention is important, whether the U.S. patent system is broken, and whether I think we’ll ever have flying cars, read more here.