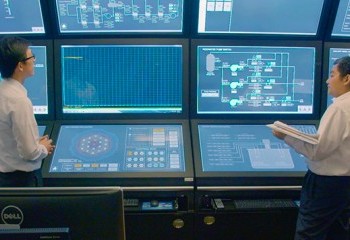 Why We Need Innovative Nuclear Energy

People and the planet need every source of reliable, carbon-free energy we can get.

In 2006, Bill Gates and I took a hard look together at all the options humanity has for powering the 21st century. At that time, 81% of the world’s primary energy—the raw form, before it is converted to electricity, gasoline, etc.—came from fossil fuels. Back then, you might recall, oil prices were soaring. Many analysts were actually quite worried about “peak oil” and coming shortages if growing demand outran shrinking supplies.

It was already obvious in 2006 that the world is not going to halt global warming, ocean acidification, and air pollution just by conserving energy. Roughly a billion and a half people were then living without electricity—but they certainly wanted and needed it. World population was growing. In much of the world, people were living longer and better. They were buying more cars and using more home heating and air conditioning. All of this was set to continue, and all of it would demand more energy.

Solar and wind power and biofuels were growing fast, and that was great. But I could already see major limitations looming ahead: the huge amounts of land needed, the lack of scalable ways to match their inconstant power to society’s unremitting thirst for energy. Anyway, plenty of good minds were already working on improving those kinds of renewable energy.

But there seemed to be a huge opportunity to rethink nuclear power. Most of the reactors operating around the world—including the ones at Fukushima and almost all of the 100 or so plants operating in the U.S.—were built from designs drafted during the slide-rule era. A tremendous revolution in computing and modeling know-how empowered nuclear engineers to explore in hours novel ideas that would have taken years to test in the 1980s. Utilities have exploited the new technology to make existing reactors more reliable than ever. But generations have passed with hardly any qualitatively new kinds of reactors making it to market.

I couldn’t help but wonder: what would happen if we put state-of-the-art computing in the hands of some of the world’s best nuclear physicists and then gave them a high bar to clear and a short deadline to do it? Could they build on pioneering work done at the national labs back in the days when the U.S. still built new reactors? Could they invent a new kind of nuclear power plant where safety would be guaranteed by the basic laws of physics? One that would generate much less waste—or better yet, burn existing waste? A plant that slashes operating costs and avoids worries about nuclear proliferation? Just imagine how that could change the world.

It seemed worth a shot. So with the backing of Bill and a few others, we launched TerraPower and dove in to the hard work of trying to make this real.

Now here we are, 12 years later, in 2018. What’s changed? We did get a breakthrough in energy technology, but not the one we were looking for. It’s called fracking, and it has made natural gas cheap and kept oil affordable, while wreaking havoc on electricity markets to the detriment of cleaner alternatives. Meanwhile, global warming lurches ahead. Greenhouse gas emissions continue to grow. So do solar and wind power. But do you know how much of the world’s primary energy comes from fossil fuels today? It’s 81%—the same as in 2006.

Universal access to energy is arguably the most essential ingredient to ensuring that every child can live a healthy life of dignity and realize his or her human potential.

Consumption of fossil fuels has grown—not shrunk—despite all the new solar and wind farms and all the new LED bulbs and hybrid cars because humanity just keeps using more energy every year. The amount of energy consumed by an average person in China (expressed as continuous power, averaged over the year) has jumped by a quarter since 2006, to 3 kilowatts (kW). That’s six times as much as the energy use of an average African, which is a mere 0.5 kW. But it’s still less than a third as much as the average American uses, which at 9.2 kW is equivalent to nine toasters, running 24x7.

Here’s my bet: before this century is out, we’ll see almost everyone in the world consuming energy at least as fast as Americans do now. That includes the 1.1 billion people who lack electricity altogether today.

In many ways this would be the realization of a shared dream, because energy is the fulcrum that gives leverage to human ingenuity. Universal access to energy is arguably the most essential ingredient to ensuring that every child can live a healthy life of dignity and realize his or her human potential.

Some people argue that it would be disastrous for the currently poor parts of the world to ramp up their energy use. I find that argument morally reprehensible. Who are we to say that our lifestyle is fine for us but not for others?

Morality aside, the economic development of countries like China, India, Brazil, Indonesia, and South Africa is unstoppable, in the long run. History shows that societies organize themselves and their institutions to keep standards of living rising, and this drives energy consumption inexorably upward over the long term.

If I’m right, that means that humanity’s energy challenge is far larger than most people understand. Raising the global average energy use from 2.4 kW, where it stood in 2017, to the current U.S. level of 9.2 kW per capita means nearly quadrupling energy production. And if all that new energy isn’t made with near-zero carbon emissions, the climate will be a wreck.

The challenge is probably even greater than this. Humanity is now around 7.5 billion people. The U.N. Population Division forecasts that our species will number 10 to 13 billion by century’s end. Ten billion of us using energy at current U.S. rates works out to a five-fold increase in global energy production over what we make today. Ironically, the one of the strongest determinants for a society to lower its population growth rate is prosperity, which is correlated to energy usage.

Of course, the current U.S. average of 9.2 kW isn’t carved in stone either. As we continue to innovate, some technological advances boost the energy efficiency of existing devices. But there are limits to those improvements. And innovation also creates new uses for energy.

As you read this, for example, millions of computers are humming along in vast data farms built by Facebook, Amazon, Google, and Microsoft, just waiting for you or someone else to access them over the Internet. A generation ago, nobody would have forecast server centers as major energy users. But today Google consumes as much energy as all of San Francisco, and energy consumption by data centers in Virginia is huge and growing at 18 percent a year.

If that five-fold increase in global energy use—or even a fraction of it—materializes, it won’t be possible to meet the demand and avoid trashing the atmosphere without taking full advantage of nuclear energy. But we would be foolish to rely on the nuclear technology of the slide-rule era. No other industrial sector would do that.

That’s why it is so crucial that we turbocharge the pace of innovation in nuclear power. TerraPower is just one of dozens of startups around the world that are now exploring new and better kinds of reactors: big ones, tiny ones, some that float, and some that operate underground. Several of these innovative designs could burn existing nuclear waste and the byproducts of uranium enrichment.

It’s too early to say which ideas will succeed. I hope all of them do. The need is global, and the market for winning technologies will be huge. Governments and investors would be smart to place many bets. We need to increase the odds that at least one will pay off wildly—and soon.