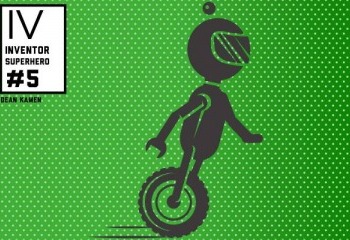 While some superheroes have a specific strength, others have the power of versatility. Inventor Dean Kamen’s ability to invent new technologies in a vast array of fields makes him one of the more resourceful inventors in our Inventor Superhero series.

Like many famous inventors, Kamen struggled with rigidity and lack of creativity in school, and spent his time outside of the classroom tinkering in his parents’ basement. From the young age of five, Kamen had already invented a tool to help him make his bed without having to run to both sides. And by the time he was 16, he was making a living developing light and sound systems for bands and museums around New York.

When Kamen isn’t working on his own inventions, he’s helping kids with theirs. As founder of FIRST® (For Inspiration and Recognition of Science and Technology), he’s helped high school students across the U.S. learn to use science and technology in creative ways.

Superpowers: Inventing one thing is impactful, but inspiring thousands of other inventions is a serious superpower. When Kamen isn’t whipping up his next technology, he’s helping kids learn to create something new.

Eureka! Moment: In the 1970s while attending Worchester Polytechnic Institute, Kamen and his brother – a medical student at the time – were discussing patient care needs. Patients who needed around-the-clock treatment had to travel to clinic to be administered medicine. Could they come up with an invention to help give time and freedom back to these patients? The brothers invented an automatic infusion pump – a device to automatically adminster medication when needed. Kamen dropped out of school and spent the next five years developing this product and creating his first medical device company, AutoSyringe. His wearable infusion pump is used in medical specialties from cheomotherapy to endocrinology.

Cool Gadgets: With more than 440 U.S. patents to his name, Kamen has developed and improved countless medical devices. He also revolutionized daily transportation by creating the I-Bot Wheelchair, which led him to the creation of the Segway® Human Transporter. And he’s invented everything from a fully functioning robotic arm to the Slingshot – an efficient water purifier for use in the developing world.

Be a Superhero Fan: Do you want to join Kamen in helping kids across the country have fun with science and technology, and maybe become inventor superheroes themselves one day? Join Intellectual Ventures in mentoring FIRST teams.